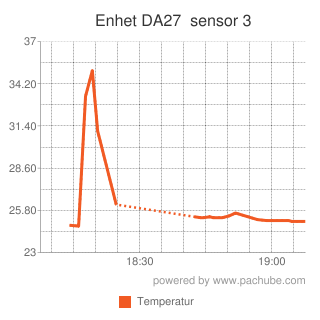 The event Elmia Agriculture, Livestock & Technology took place 19-22 of October 2011. Liros Electronic in monter D01:39 showed wireless temperature sensors that could be observed on the web and in mobile apps on Android and iPhones.
Videocent helped bring Liros traditional wired and handheld temperature equipment up into the internet cloud and and then down into the hands of farmers and their mobile phones. Our work has so far included not only the making of web and apps, but we have also helped select ZigBee and GSM vendors, writing scripts for three internet cloud services and are on our way in discussions with a GSM operator.

Below are two of the graphs. A dotted line means that the sensors are off-line, a filled line show actual measured values. These sensors are live when we experiment with the system and can therefore show very strange results from time to time.