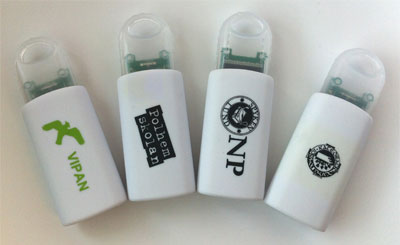 Videocent has developed a concept for using laptops during exams. It includes math programs and a word processor, put on an USB stick, thus replacing purchasing expensive calculators. Internet and other communication is blocked and the local laptop hard drive is not accessible during exams. It enable students to write texts and answers on their computers, like they are used to from their lessons.

During this year we have delivered the concept to the four largest secondary schools in Lund. They have used them for essay writing tests in Swedish and for the national ”math-tests”. In national tests about 200 students at one time have been using the solution.

When doing an exam, the first step is to make a master USB. The teacher makes the number of copies necessary for the test using an USB copying machine. The copied sticks are handed out to the students, who starts the computer with the stick as start-up-drive. After the test is done, the test is saved on the stick, and given back for the teacher to grade.

A problem often discussed with tests is unfair correction: The teachers, often unconsciously, are influenced by who took the test. Handwriting is often recognized. At the Vipan secondary school, the USB sticks are individually numbered. The number of the USB stick issued to each student is noted in the class list. The teacher does not know who submitted the test when it is graded.  Not even the handwriting reveals whose test it is!

Further information can be found in the article Computers in schools means computers on exams and provdator.se (in Swedish).